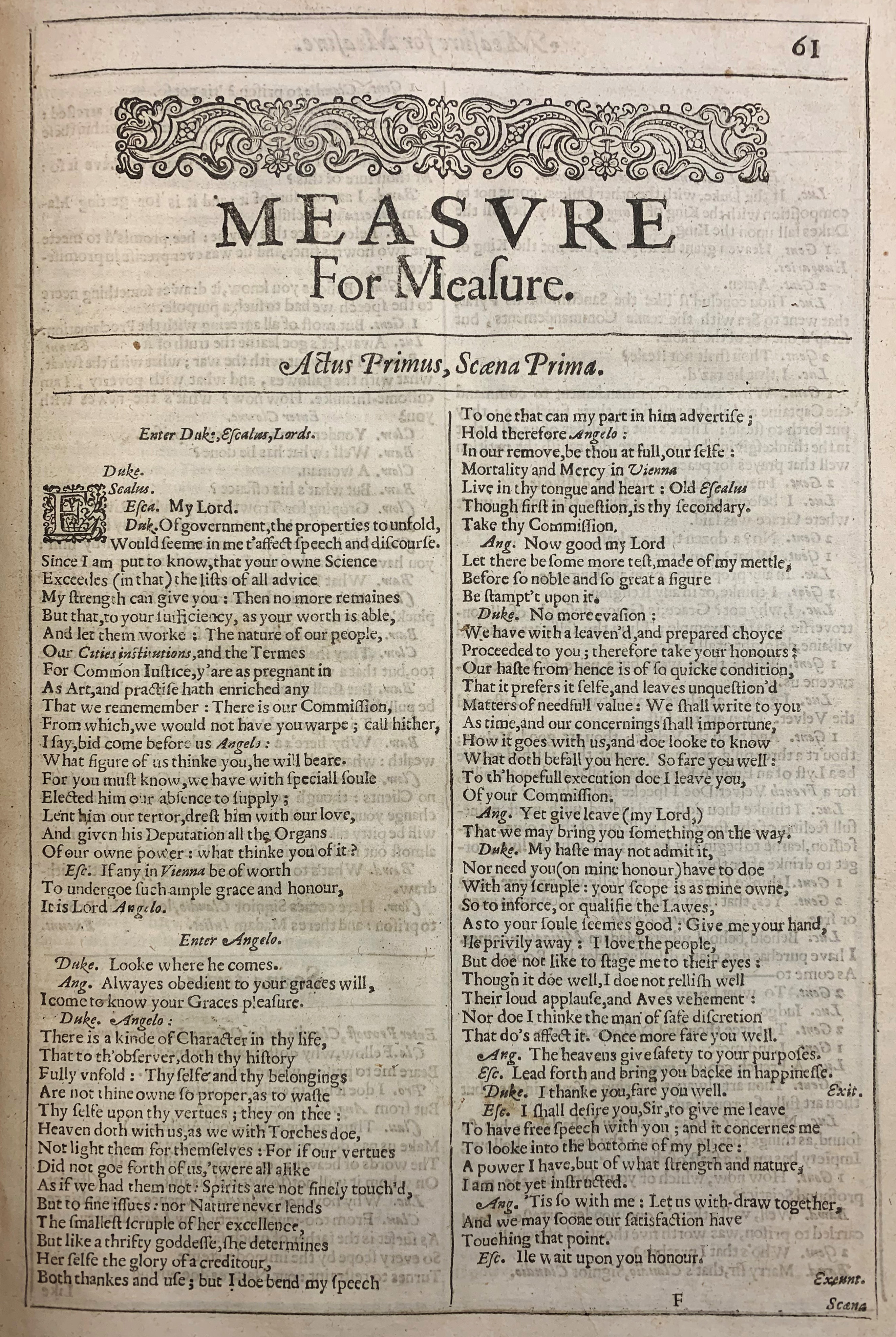 The Folger Shakespeare Library, located in Washington, D.C., holds 82 First Folios, roughly one third of those still surviving.  These first edition copies of Shakespeare collected plays were published in 1623.

The Folger describes the folio - or edition - as:

'... a large book made by folding printed sheets of paper in half, with each sheet forming four pages. This format was usually reserved for history, religion, and other weighty subjects. The First Folio was the first folio ever published in England devoted exclusively to plays.

Before 1623, about half of Shakespeare's plays were published in quartos—small, one-play books made by folding sheets of paper twice, to create eight pages per sheet. Quartos were like the easily disposable paperbacks of today, and relatively few of them survive. A folio was more expensive and sturdier, so it was more likely to last ...

... A total of 235 First Folios are currently known to survive, including two that were discovered in 2016.' 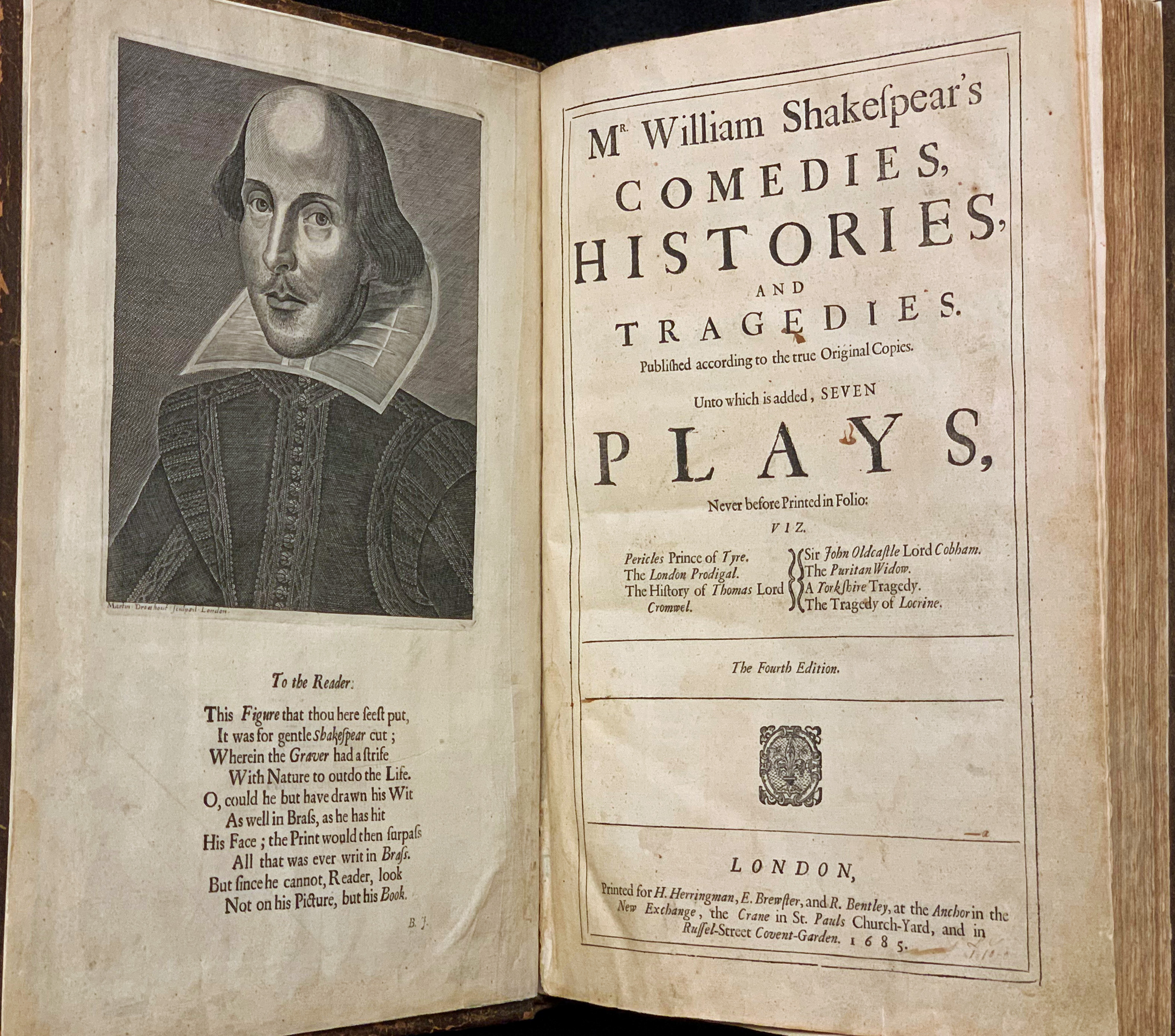 The dedications below feature flowery in memoria written by poet and fan Leonard Digges and by fellow playwright Ben Johnson. 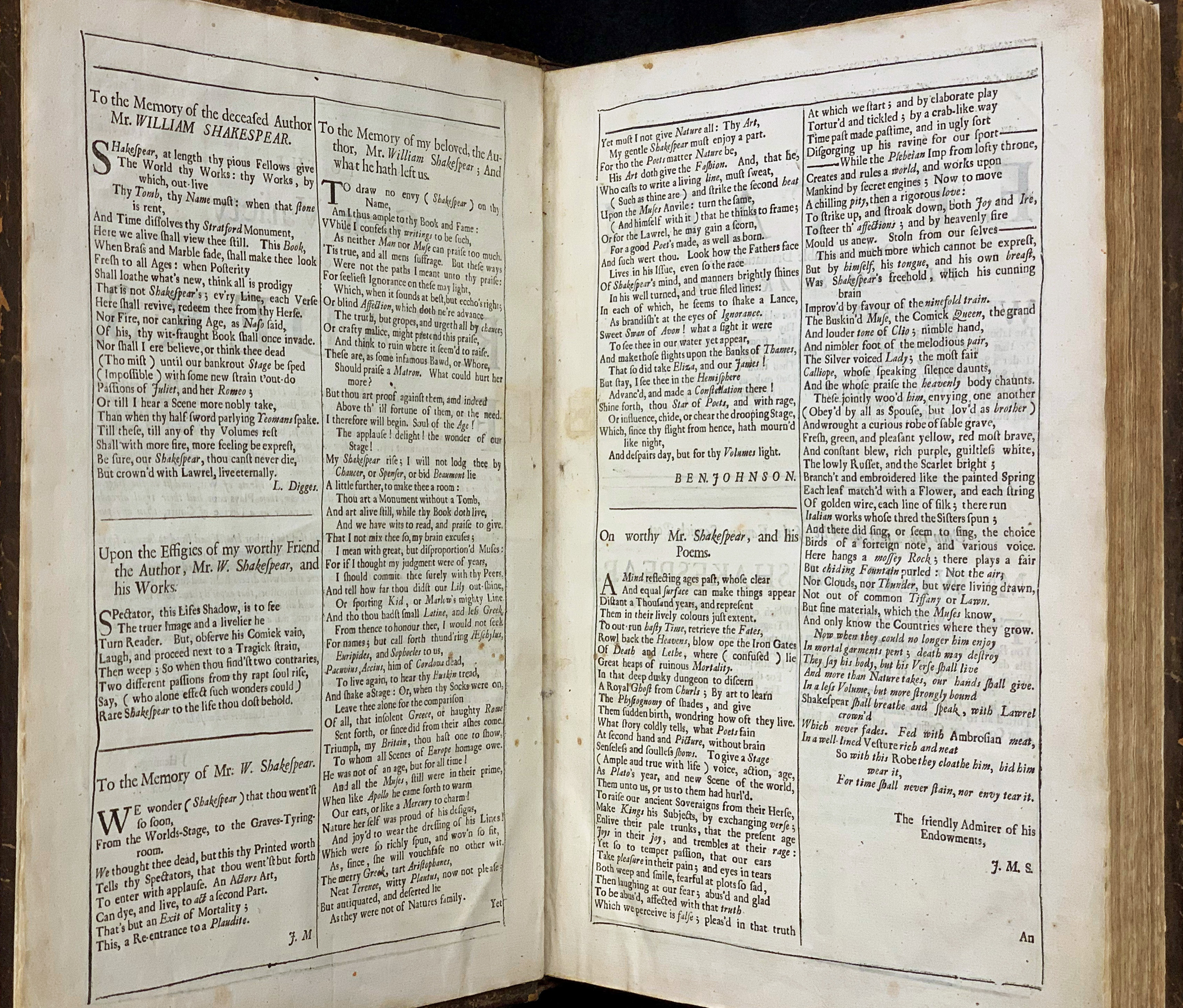 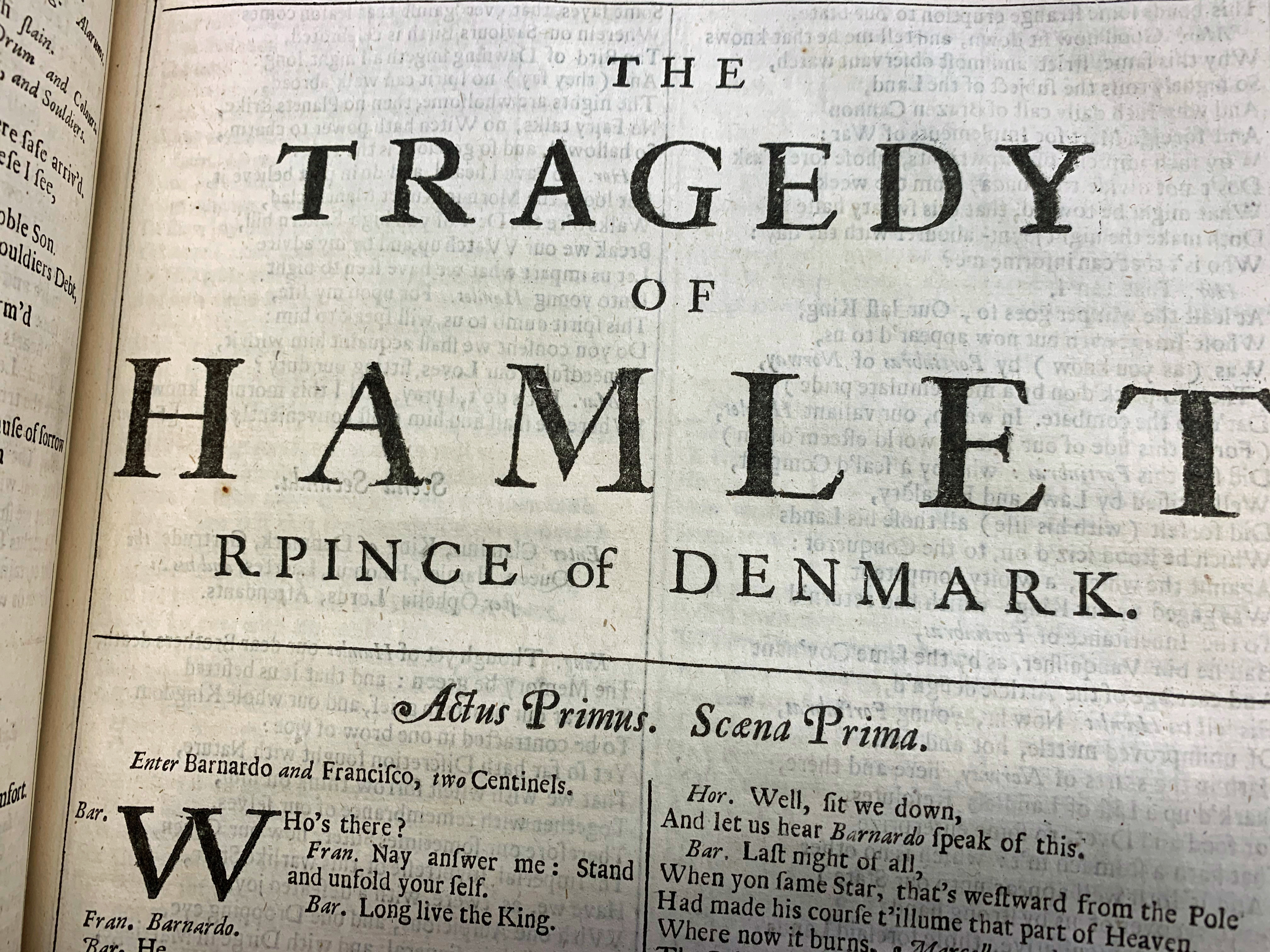 Even the best of letterpress printers make mistakes.  See above for the title page of the Rare Books Collection's Fourth Folio's 'TRAGEDY OF HAMLET 'RPINCE' of DENMARK.'

Shakespeare's folios served as a template for the performance of the playwright's work. Michael Dobson, Director of the Shakespeare Institute, describes the uses of Shakespearean prompt books, such as the Folger Library's Third Folio edition of Macbeth, which was annotated and used in the production of the play by Smock Alley Theatre, Dublin in the late seventeenth century:

Prompt books come in all shapes and sizes, designed for slightly different purposes or for use by people in different roles within the theatre. But essentially they all have one function in common: to help the actors, stage managers, prompters and directors piece together a theatrical production.

The prompt book is the production's bible, containing a wealth of instructions and information alongside the basic text of the play. As well as the actors’ lines, you will often see cues for music, movement, light, and many other aspects of stage business. Cuts and annotations are sometimes scribbled beside or on top of the text or in the margins. You will even occasionally see doodles or sketches of how a piece of staging is supposed to look, or which costume a character should wear in a scene. Some prompt books are extremely detailed, while others have hardly any notes at all.

Most prompt books in the resource have a 'Primary Association' - that is, the individual with the closest connection to that particular copy of the prompt book. In many cases this is the owner of the book, or the person who made the annotations. 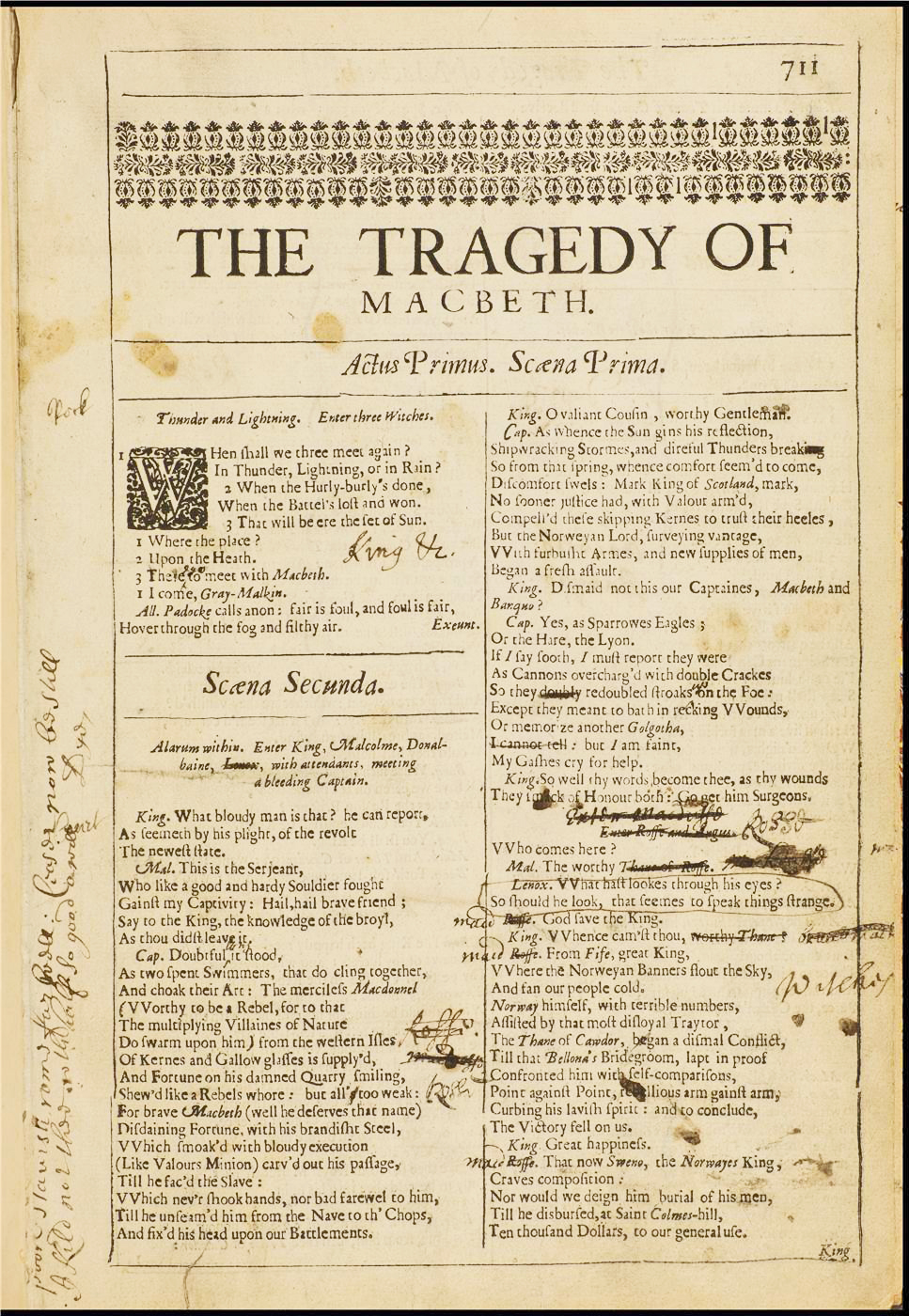 As seen by the prevalence of prompt books during the late seventeenth, eighteenth, and nineteenth centuries, Shakespeare's work only gained in popularity.  Writing in 1796, Edmond Malone's An inquiry into the authenticity of certain miscellaneous papers and legal instruments, published Dec. 24, MDCCXCV. and attributed to Shakspeare, Queen Elizabeth, and Henry, Earl of Southampton: illustrated by fac-similes of the genuine hand-writing of that nobleman, and of Her Majesty; a new fac-simile of the hand-writing of Shakspeare, never before exhibited; and other authentic documents hoped to generate interest and to capitalize on a little intrigue surrounding the playwright.  Be sure to look carefully at the 'pretended Letter from Queen Elizabeth to Shakespeare' opposite page 111.