A Backdrop of Witchcraft 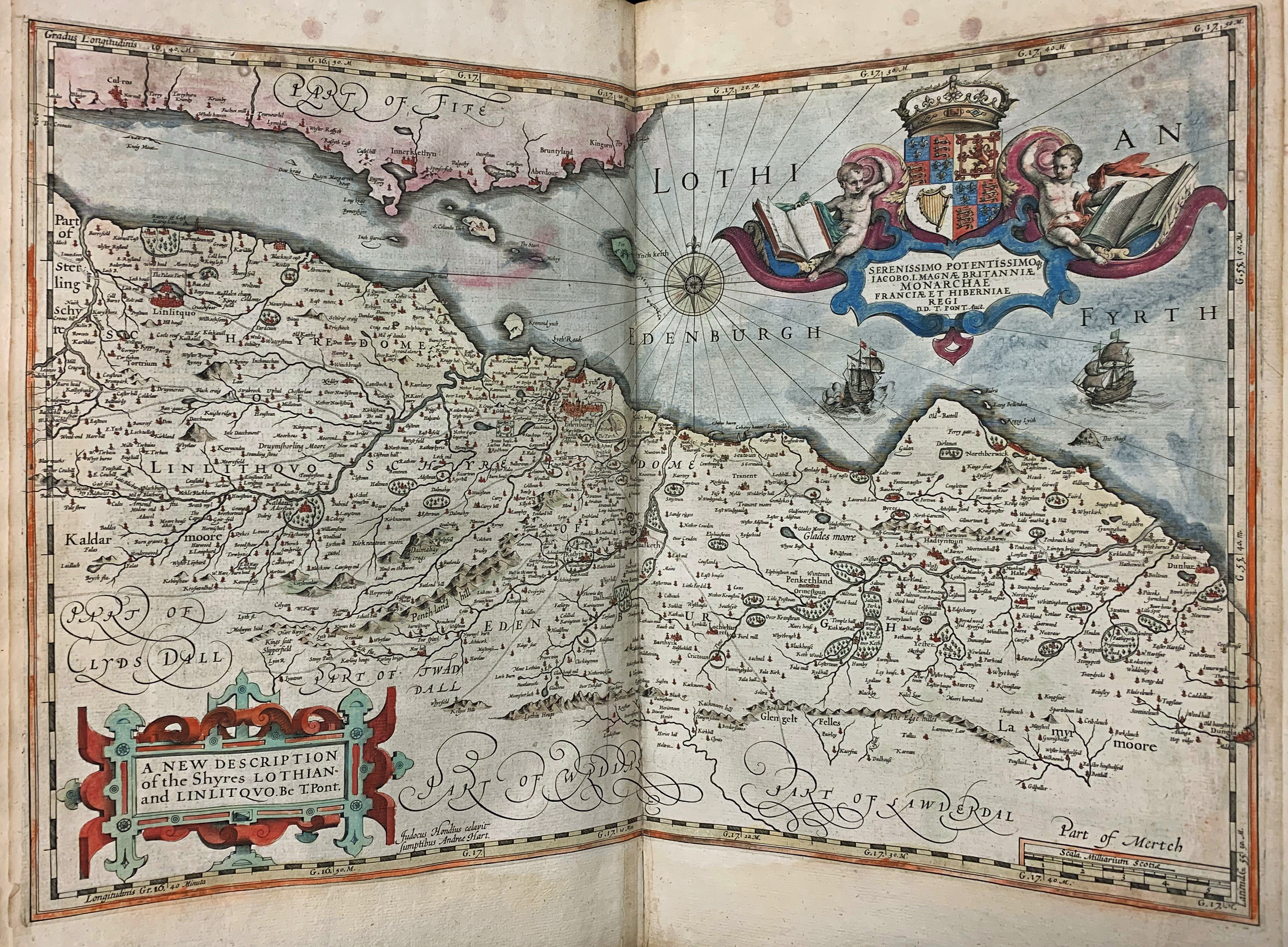 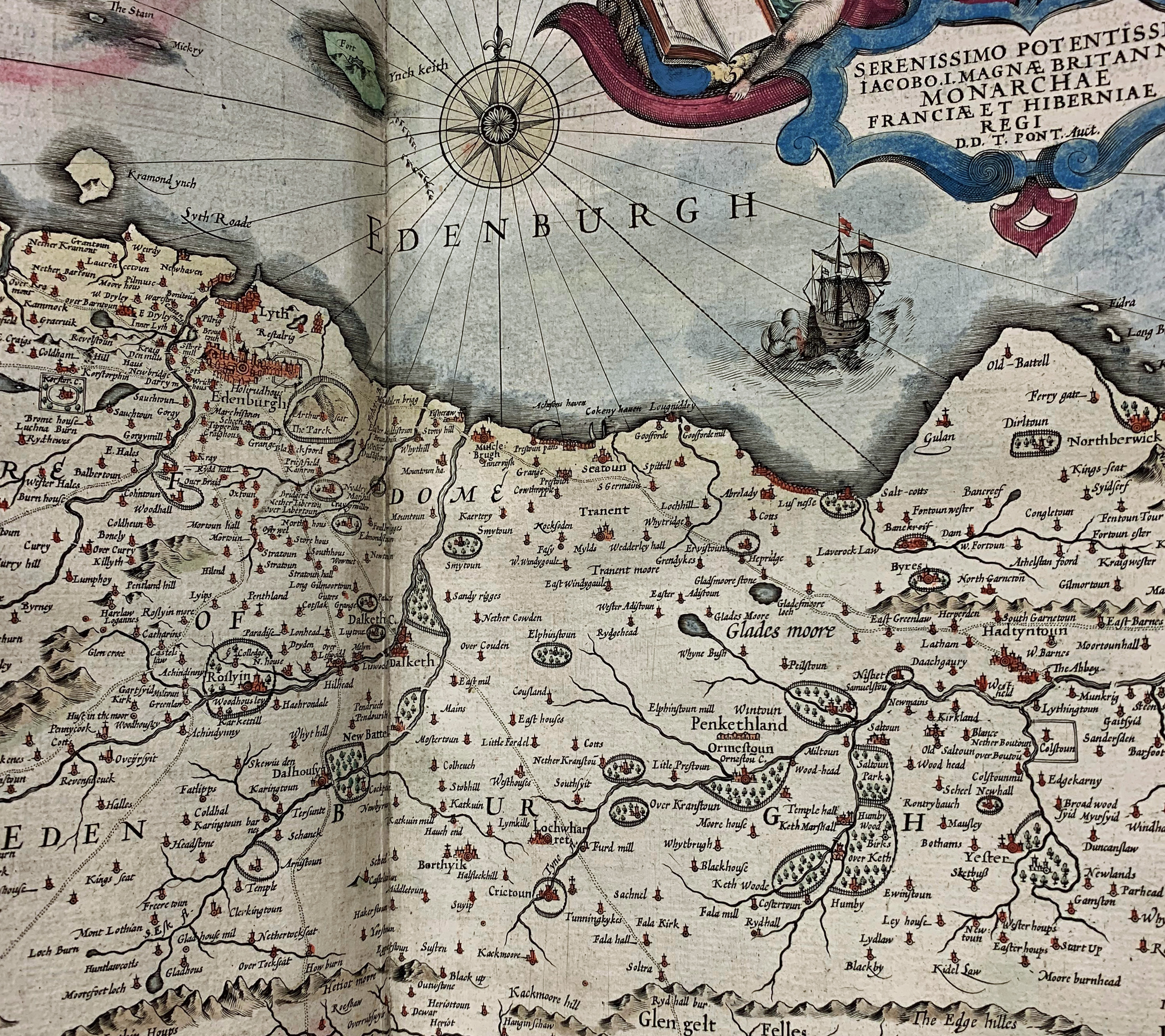 Bound in the Mercator atlas, this map of Lothian, the region of the Scottish lowlands that includes the city of Edinburgh (painted in red), shows a rugged coastline, with ships sailing just off shore in the Fyrth of Forth.

In 1590, James VI of Scotland (crowned James I of England in 1603) married the fifteen year old Anne of Denmark in Oslo, Norway.  Their return voyage to the city of Edinburgh saw the king's ship battered by storms.  Some suggested that witchcraft had been employed by the king's enemies acting in concert with powerful witches, who were centered in the small coastal town of North Berwick, Scotland, not far to the east of Edinburgh.  Having encountered 'witchcraft' in his kingdom before, the young king became convinced.  Over sixty inhabitants of North Berwick were tried for witchcraft as well as for treason for threatening the body of the king and queen.  The trial did not go well for the witches.

James interest in witchcraft, influenced not only by the trial but also by his meeting with Danish theologian and author of a 1575 treatise on witchcraft, Niels Hemmingsen, led the king to write Daemonologie (first published in Edinburgh, Scotland in 1597).  In this he described the 'fearefull aboundinge at this time in this countrie, of these detestable slaves of the Devill, the Witches or enchanters.' 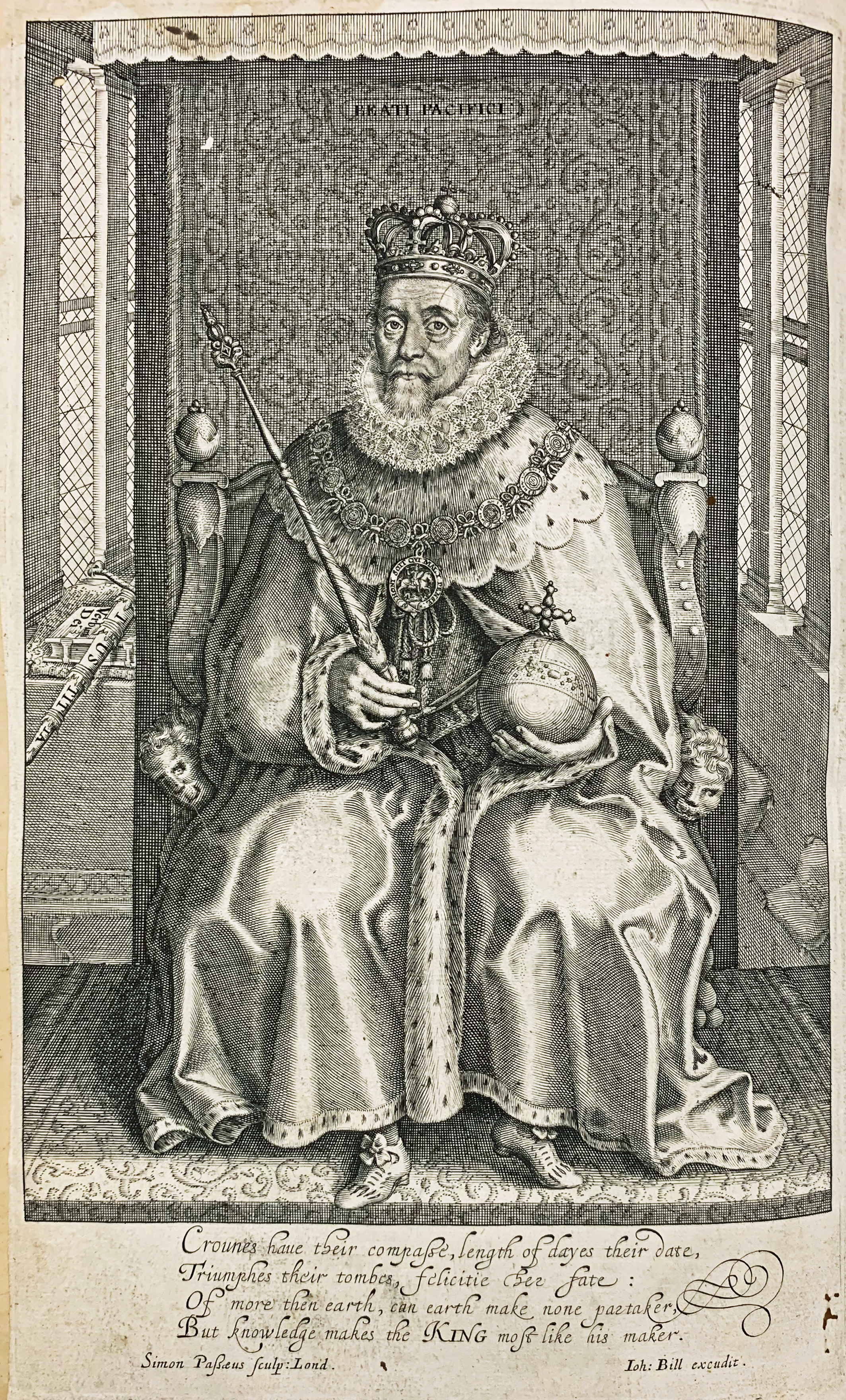 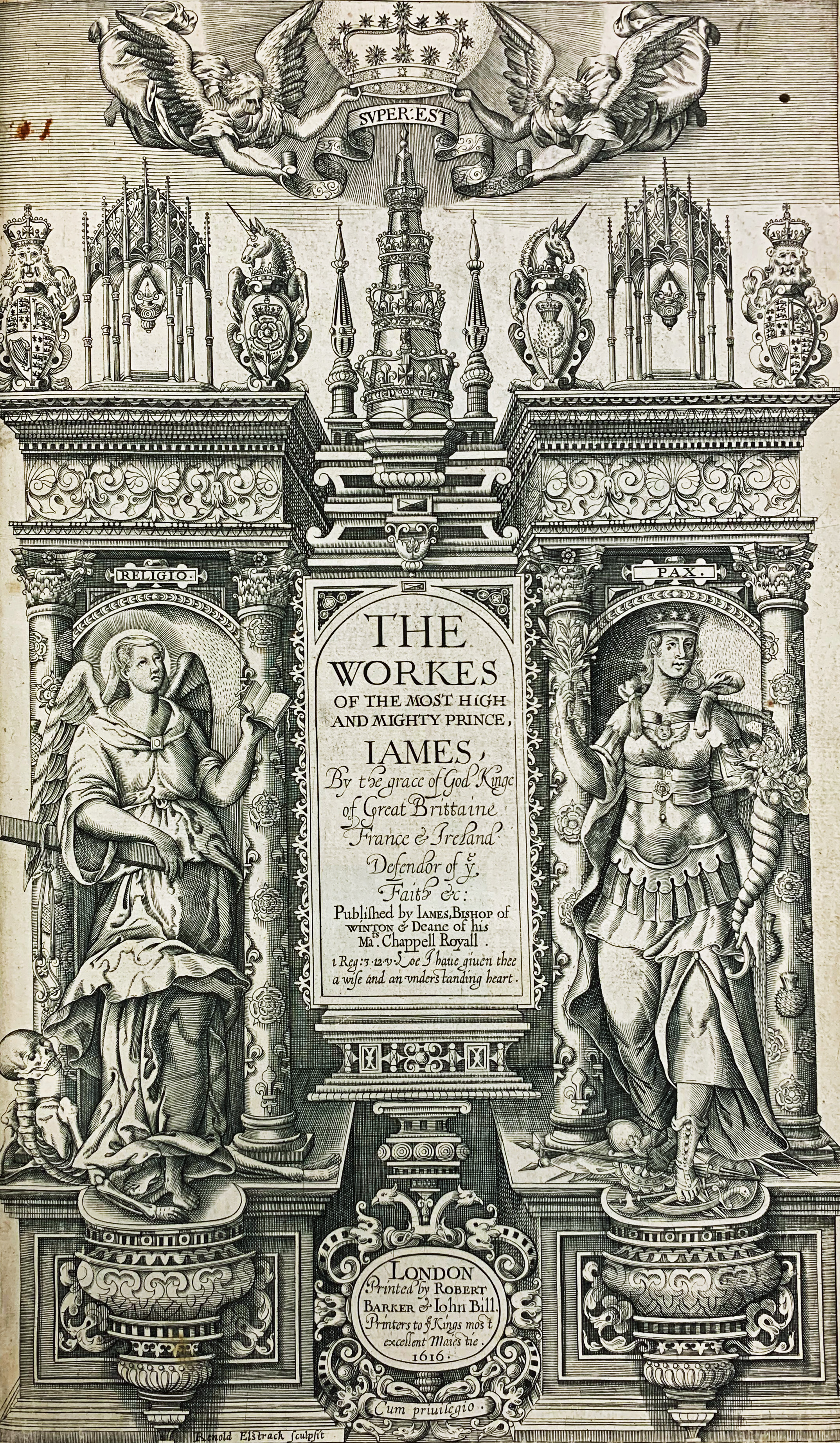 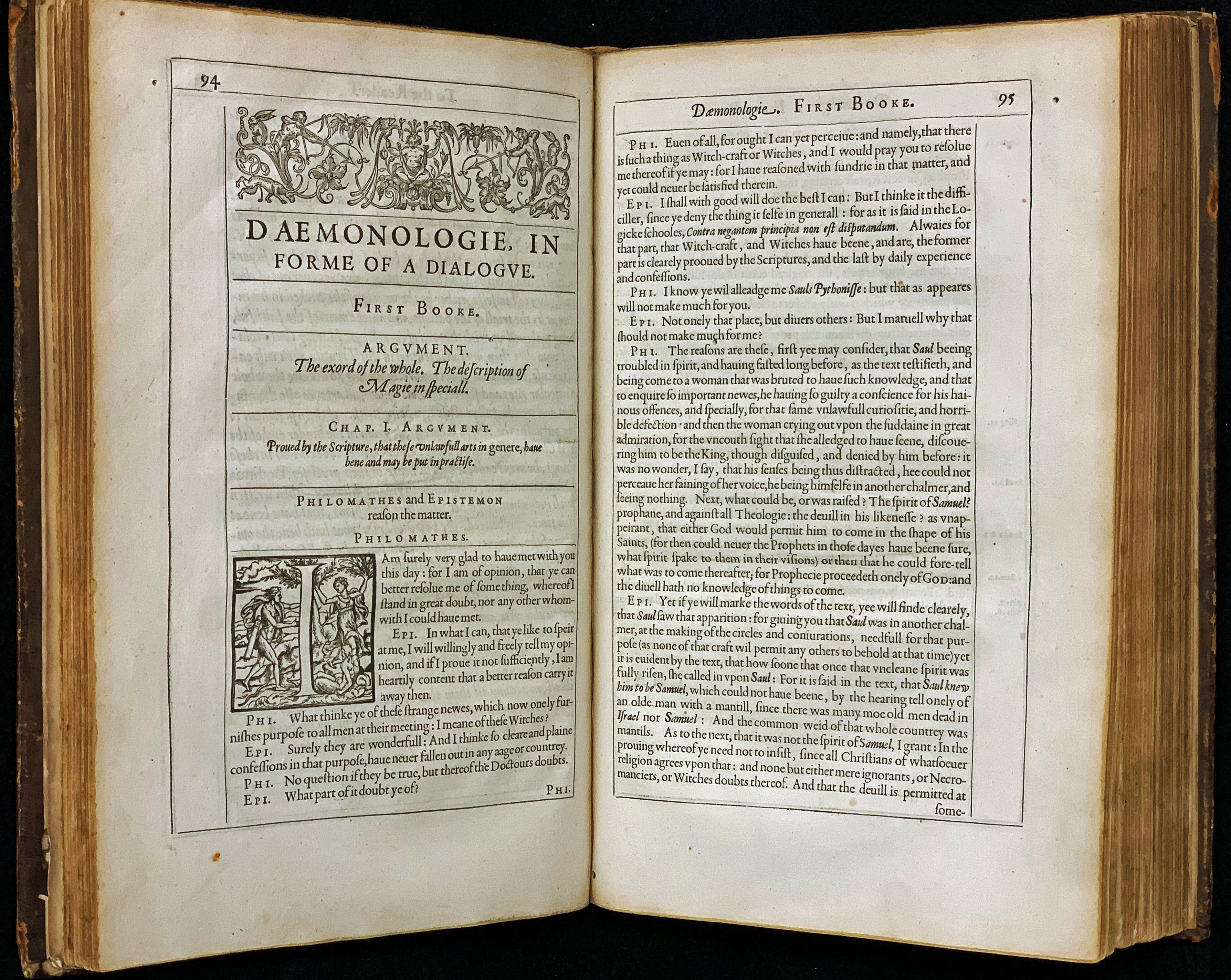 James I, King of England. The workes of the most high and mightie prince, Iames, by the grace of God King of Great Britaine, France and Ireland, defender of the faith, &c. London: Printed by Robert Barker & Iohn Bill, printers to the Kings most excellent Maiestie, 1616.
Rare Books Collection, Rare and Distinctive Collections

Daemonologie was written in the form of a dialogue, meant to convince the skeptical reader of the existence of witchcraft.  It encouraged the detection and punishment of witches.

This edition (above) of James I's collected works was published in London in 1616, well into the king's reign in England.  Here, his treatise titled Daemonologie accompanied the king's thought on lofty subjects such as the Divine Right of Kings as well as more mundane topics such as that focused on the ills of the use of tobacco.

Daemonologie certainly influenced Shakespeare's take on witchcraft in Macbeth, his portrayal of witches a departure from Holinshed's three 'weird sisters,' seen below.

A full scan of the Rare Books Collection's copy of James I's Daemonologie, published in the king's Collected Works is available here. 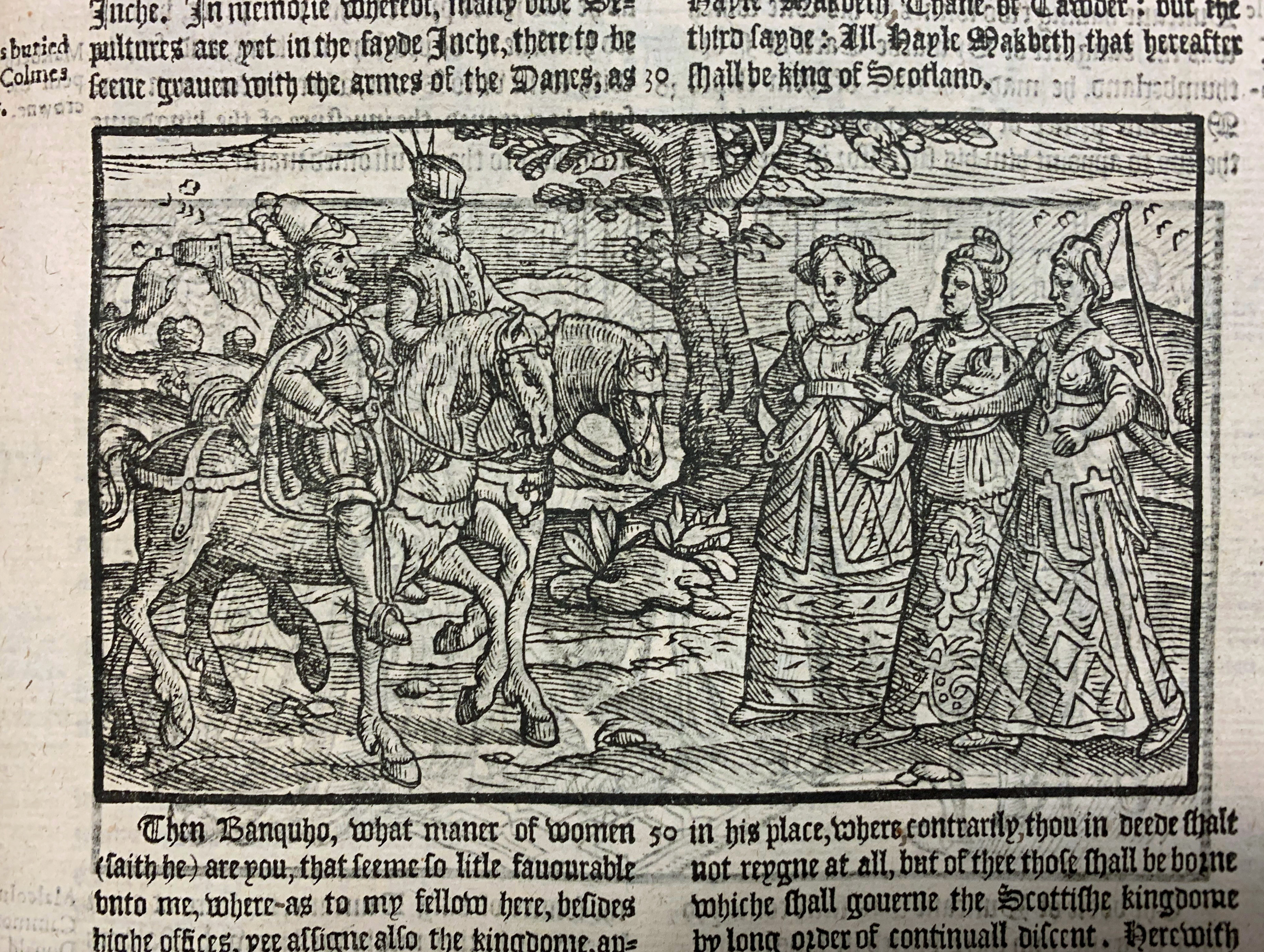