A guide for understanding the history of western science using original materials found in CU's Rare and Distinctive Collections..

European "science" before the year 1600 resembled a mix of what we would now term religion, astrology, alchemy, and a variety of fledgling scientific disciplines. Notable was the medieval belief that the classics (Greek and Roman math and science authors) were the most important texts in most scientific areas of study. By the later Middle Ages and beyond (1200-1600), however, an increasing number of scholars began to dig more deeply into disciplines that had been dominated by the classical texts for nearly 2000 years.

The Importance of Classical Science (Greek and Roman)

For Europeans living during the Middle Ages and beyond (c. 500-1600), the classical Greek and Roman authors remained the pinnacle of mathematic and scientific practice. Authors such as Aristotle, Euclid, and Pliny were endlessly copied into books in the late Middle Ages and printed extensively with the rise of the printing press around 1450. CU's Rare Books Collection holds many early printed copies of such texts. Check out a few editions below:

The pictures below are from an early printed copy of Aristotle's works in Latin that is held in CU's Rare Books Collection. Most of Aristotle's (lived 384-322 BCE) ancient Greek texts actually came to medieval Europe via translations from Arabic into Latin, which scholars began to circulate in Europe in the 1100s. These texts had major impacts on medieval philosophy, but they also served as the basis of western science for hundreds of years. If you are interested in English translations of Aristotle's texts, check out this site. 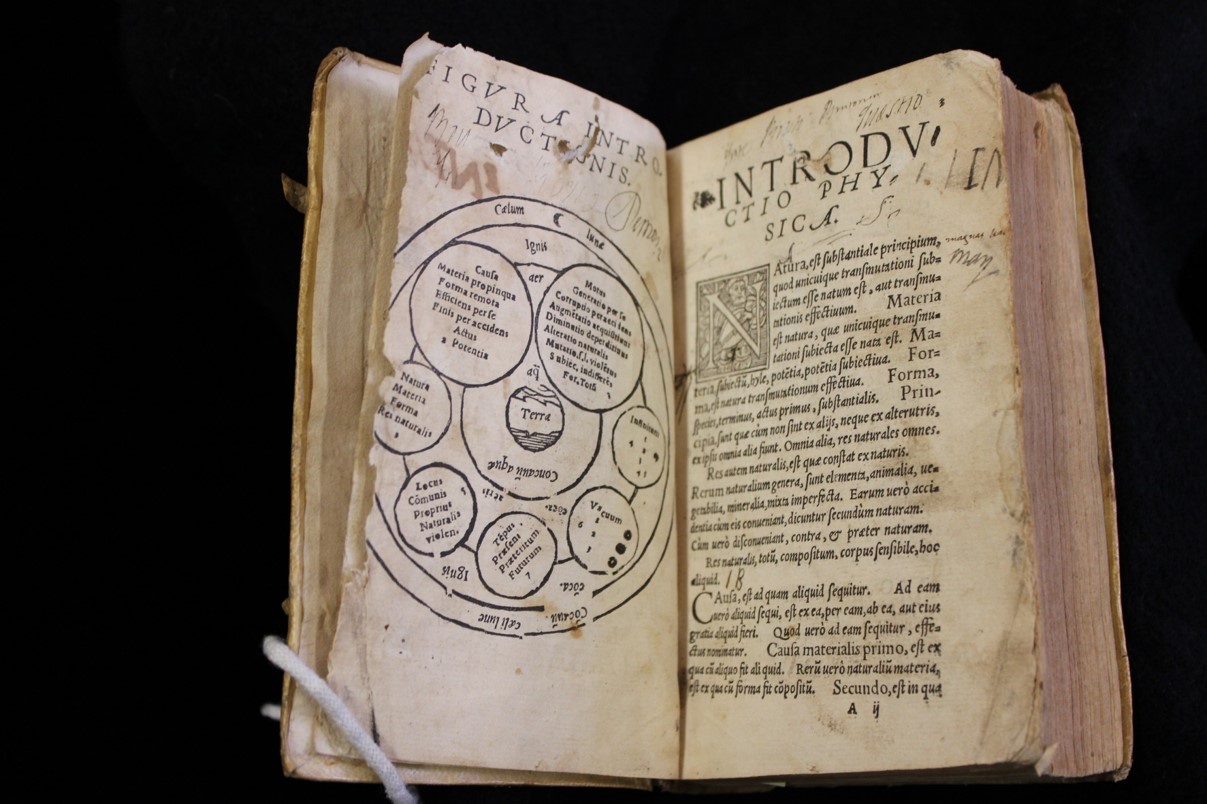 The first page of Aristotle's work Introductio Physica, an Introduction to Physics. The chart on the left summarizes his views of the physical systems of the world.

In medieval universities, seven liberal arts served as the basis for an education: grammar, rhetoric, logic, geometry, arithmetic, music, and astronomy. Of these liberal arts, only math and astronomy fall under what we would now consider the sciences.

The thirteenth century witnessed the creation of two important texts relating to astronomy. See the video below for more information.

This video highlights some of our unique medieval astronomy holdings. Note it was created for an exhibit, so you can skip through the intro and credits!

Leonardo da Vinci (1452-1519) is well known for being an anomaly in the history of western science. His vast notes included work in engineering, technology, anatomy, and many other fields and often feel like they are hundreds of years before their time. His unpublished notebooks are a fascinating primary source that you can discover for yourself. Check out this site highlighting the Codex Atlanticus, important sketches (engineering, in particular) by da Vinci. Check out the video below for more information, narrated by Susan Guinn-Chipman, CU Boulder Libraries, Rare and Distinctive Collections.

This video highlights some unique early modern science materials in our collection. Note it was created for an exhibit, so you can skip through the intro and credits!

Medieval medicine was based largely on the theory of the four humors established by the Greek and Roman physicians Hippocrates (c. 460-370 BCE) and Galen (129-216 CE). An imbalance of these humors (associated with the four liquids blood, yellow bile, black bile, and phlegm) could cause a variety of health issues. By the late middle ages and into the sixteenth century, however, physicians began to refocus their work on increasingly accurate anatomical models, as with Vesalius' major publication On the Fabric of the Human Body in 1543. 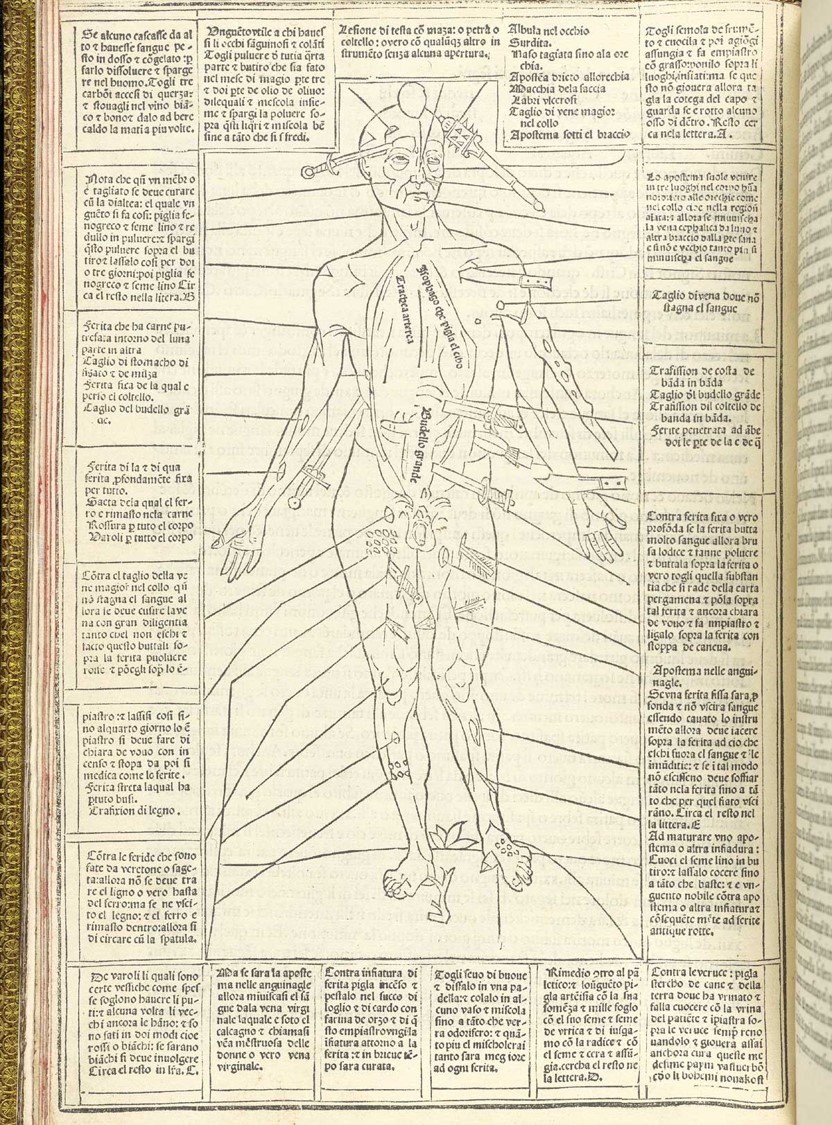 This image of "Wound Man" circulated around Europe both in manuscript (hand-drawn) form and printed form in the 15th century. Shown here is a printed copy from the Fasciculus Medicinae, a book significant because it was the first printed book to include anatomy illustrations. The image shows a variety of common weapon wounds and includes Latin description of how to treat such injuries. 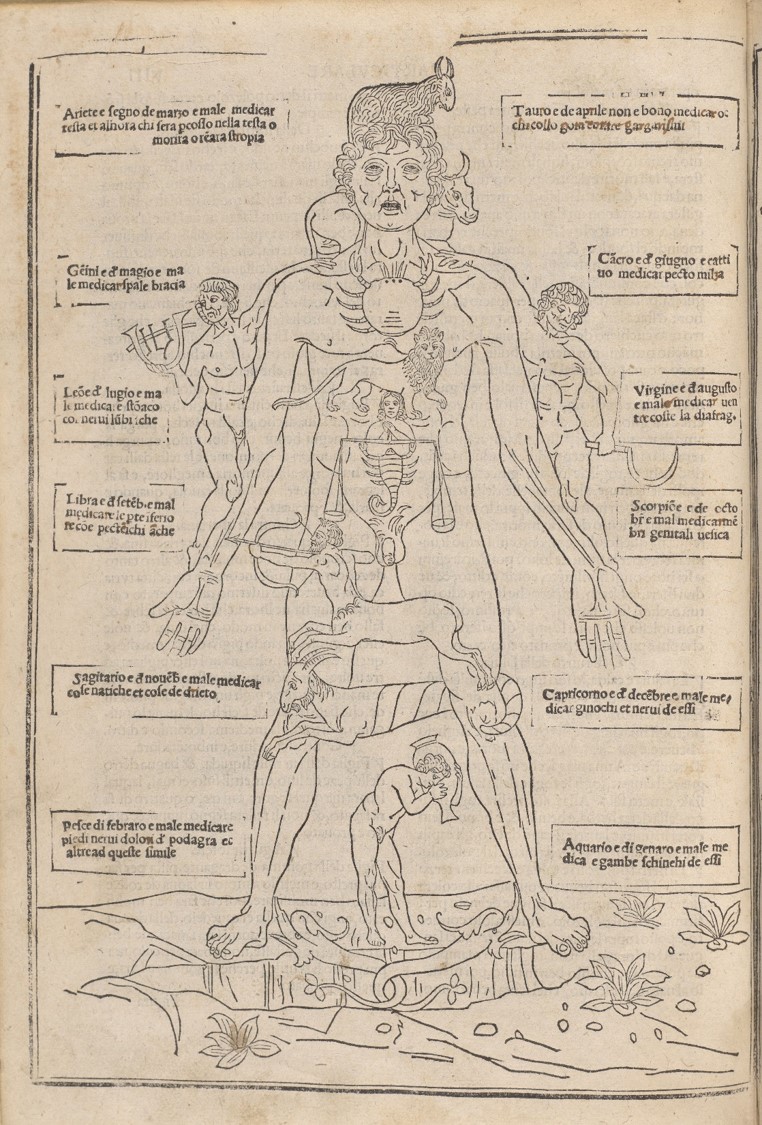 This image, also from Fasciculus Medicinae, shows "Zodiac Man." Medieval thought associated particular Zodiac symbols with certain parts of the body. Thus, the location of the planets and stars could have an impact on how you were physically feeling. 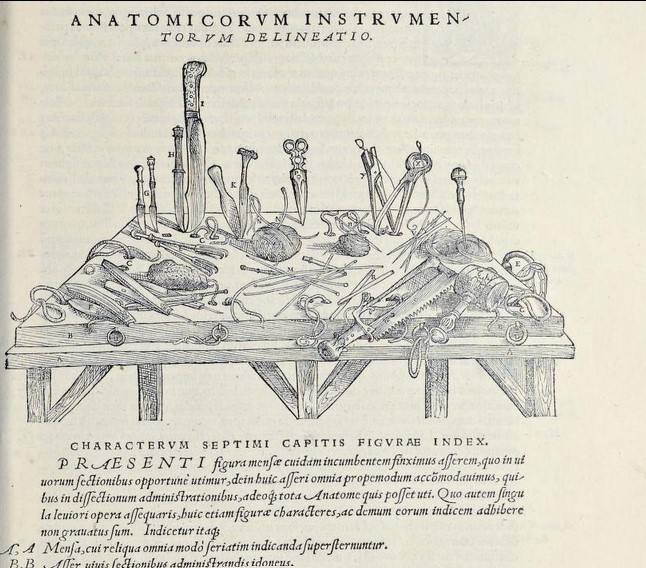