The influenza virus infects millions of people every year and evolves rapidly. Pandemics, such the infamous 1918 flu pandemic at the end of World War I, can sometimes occur when animal viruses cross over to humans. Take a look at the following sources related to descriptions of influenza, social reactions to it, and the ways that people have struggled to fight it. 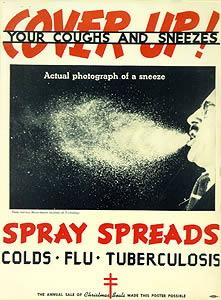 Philosophical Transactions Giving Some Account of the Present Undertakings, Studies and Labours, of the Ingenious, in Many Considerable Parts of the World (1761)

The Philosophical Transactions of the Royal Society began in 1665 as the first journal devoted entirely to science. It is still published today.

See p. 646-647 for a letter from one physician to another describing the symptoms and treatment of an outbreak of influenza in London in 1761. Notice that this book sometimes uses an old symbol called the “long s” that looks like ſ or ʃ (it is an “s,” not an “f”).

An explanation of some archaic terms and practices to help you understand the letter.

Crassamentum is the red solid part of blood that is allowed to stand.

An 1868 description of why blistering is helpful in treating disease:  “Any substance which, when applied to the skin, irritates it, and occasions a serous secretion, raising the epidermis, and inducing a vesicle. Blisters are used as counter-irritants. By exciting a disease artificially on the surface, we can often remove another which may be at the time existing internally.” From http://www.antiquusmorbus.com/English/Treatment.htm)

William Osler, The Principles and Practice of Medicine (New York, 1892).

In 1889 and 1890, a flu pandemic spread across the globe, killing about 1 million people. See William Osler’s 1892 description of influenza in his general book on medicine, found on pages 87-90.

The Influenza Epidemic in Colorado (1918)

The Influenza Epidemic at CU Boulder (1918) 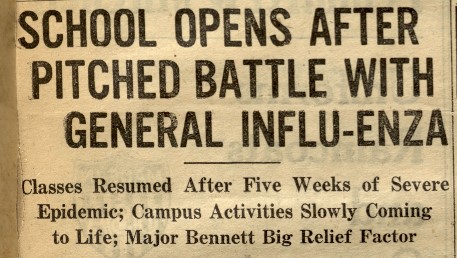 The Silver and Gold was CU Boulder's student newspaper in the early twentieth century. This issue was printed on November 11, 1918, the day CU opened after the influenza epidemic and also the day World War I ended. See the article on page 1 and its continuation on page 3.

If you are interested in viewing Helen Carpenter's diary (a freshman at CU) from the 1918 influenza epidemic, click here. (There are no questions on this document, but it might be interesting and relevant to your current experience during the COVID-19 pandemic!)