A guide to getting started with GIS

Need to know what raster data is? Did someone say "Horizontal geodetic datum?"

*Note: Much of this content is based on a guide I also created at my previous institution. 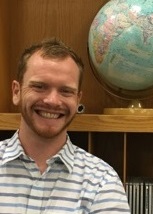