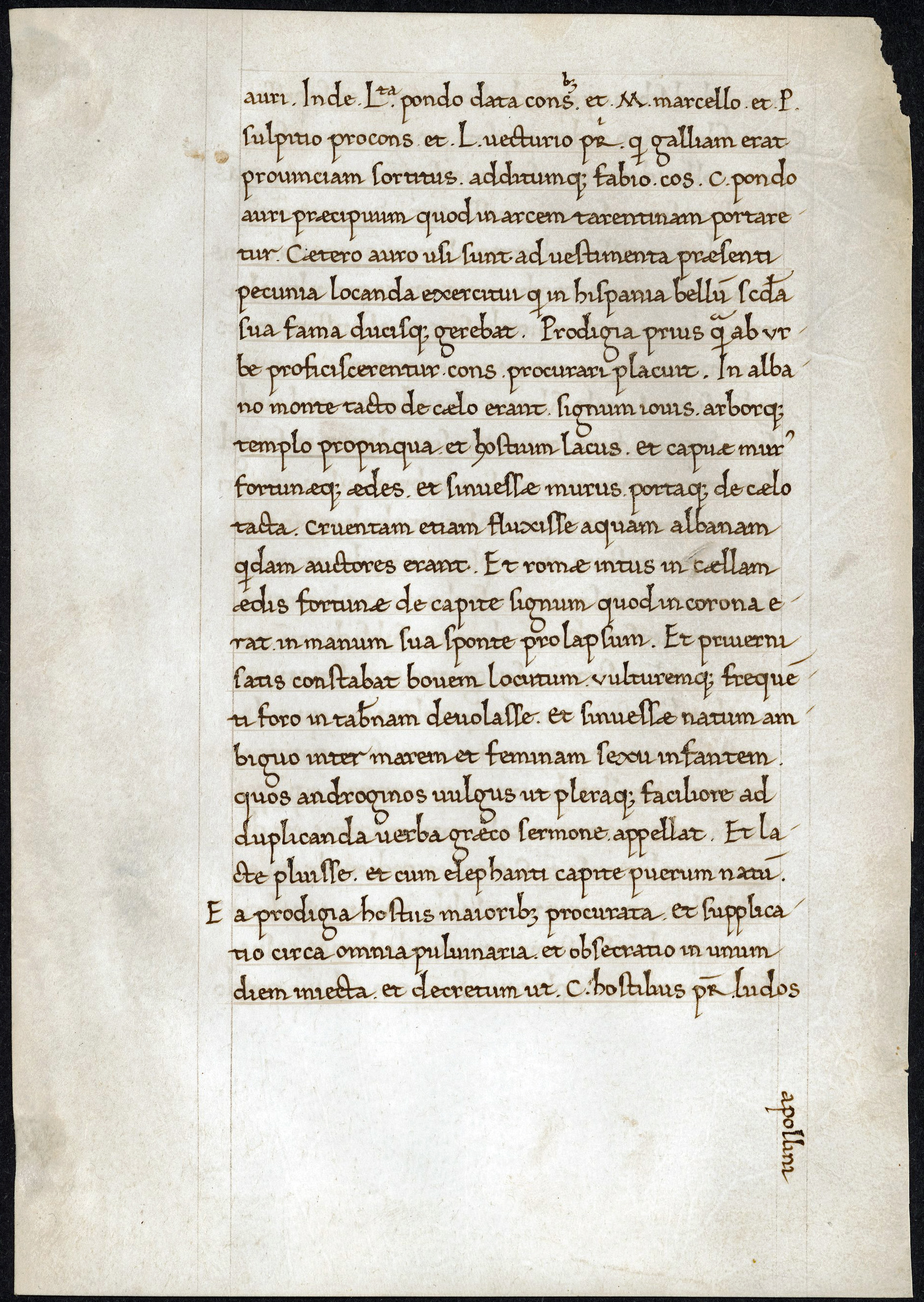 Titus Livy's (64/59 BCE – CE 12/17) History of Rome, tracks Rome from its founding, balancing tradition with historical fact.  Livy lays out his goals in his prologue:

Such traditions as belong to the time before the city was founded, or rather was presently to be founded, and are rather adorned with poetic legends than based upon trustworthy historical proofs, I purpose neither to affirm nor to refute. It is the privilege of antiquity to mingle divine things with human, and so to add dignity to the beginnings of cities; [8] and if any people ought to be allowed to consecrate their origins and refer them to a divine source, so great is the military glory of the Roman People that when they profess that their Father and the Father of their Founder was none other than Mars, the nations of the earth may well submit to this also with as good a grace as they submit to Rome's dominion. [9] But to such legends as these, however they shall be regarded and judged, I shall, for my own part, attach no great importance. Here are the questions to which I would have every reader [p. 7]give his close attention —what life and morals were like; through what men and by what policies, in peace and in war, empire was established and enlarged; then let him note how, with the gradual relaxation of discipline, morals first gave way, as it were, then sank lower and lower, and finally began the downward plunge3 which has brought us to the present time, when we can endure neither our vices nor their cure (trans. at Perseus).

Some of the leaves original to Special Collections' copy of Livy's History of Rome are held by the Bodleian Library.

For a full text translation, see Titus Livius, History of Rome, at Perseus. 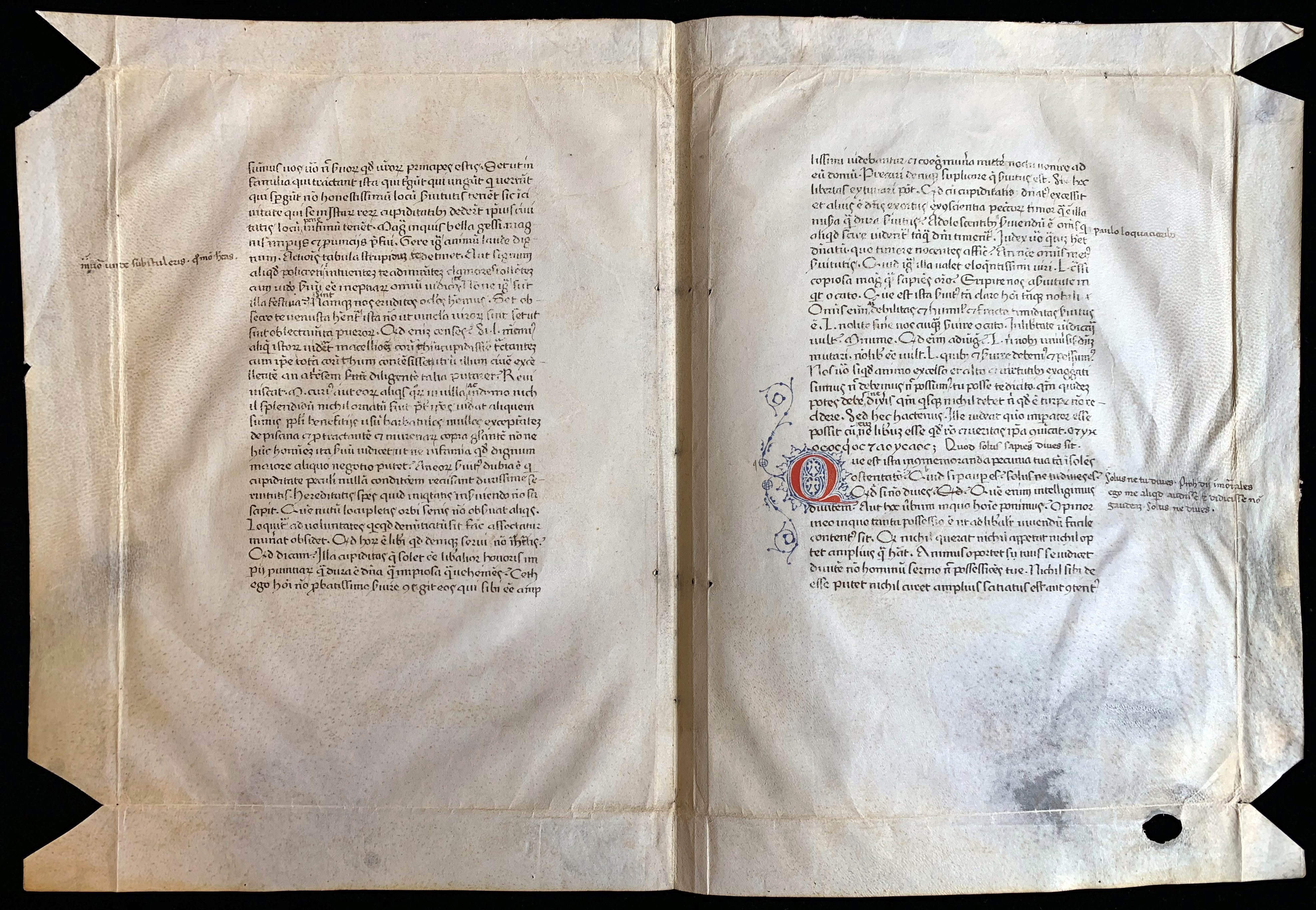 Cicero (Marcus Tullius, 106–43 BCE), Roman lawyer, orator, politician and philosopher, wrote Paradoxa Stoicorum in 46 BCE.  In the paradoxes, Cicero explains the paradoxical nature of six Stoic principles:  that moral value is the only good; virtue is sufficient for happiness; all virtues and vices are equal; all fools are madmen; only the wise man is really free; and only the wise man is rich.

Special Collections' leaves (a bifolium, or two sheets of vellum folded together, seen above) were, at one time in their past, dis-bound and re-used as a book cover or endpapers.

For an early printed edition (1465) of Cicero's Paradox Stoicorum, see Gutenberg and After at Princeton, Library.  A full text edition of M. Tullius Cicero, Paradoxa stoicorum ad M. Brutum in Latin is available at Perseus.  For an English translation (1874), see Internet Archive. 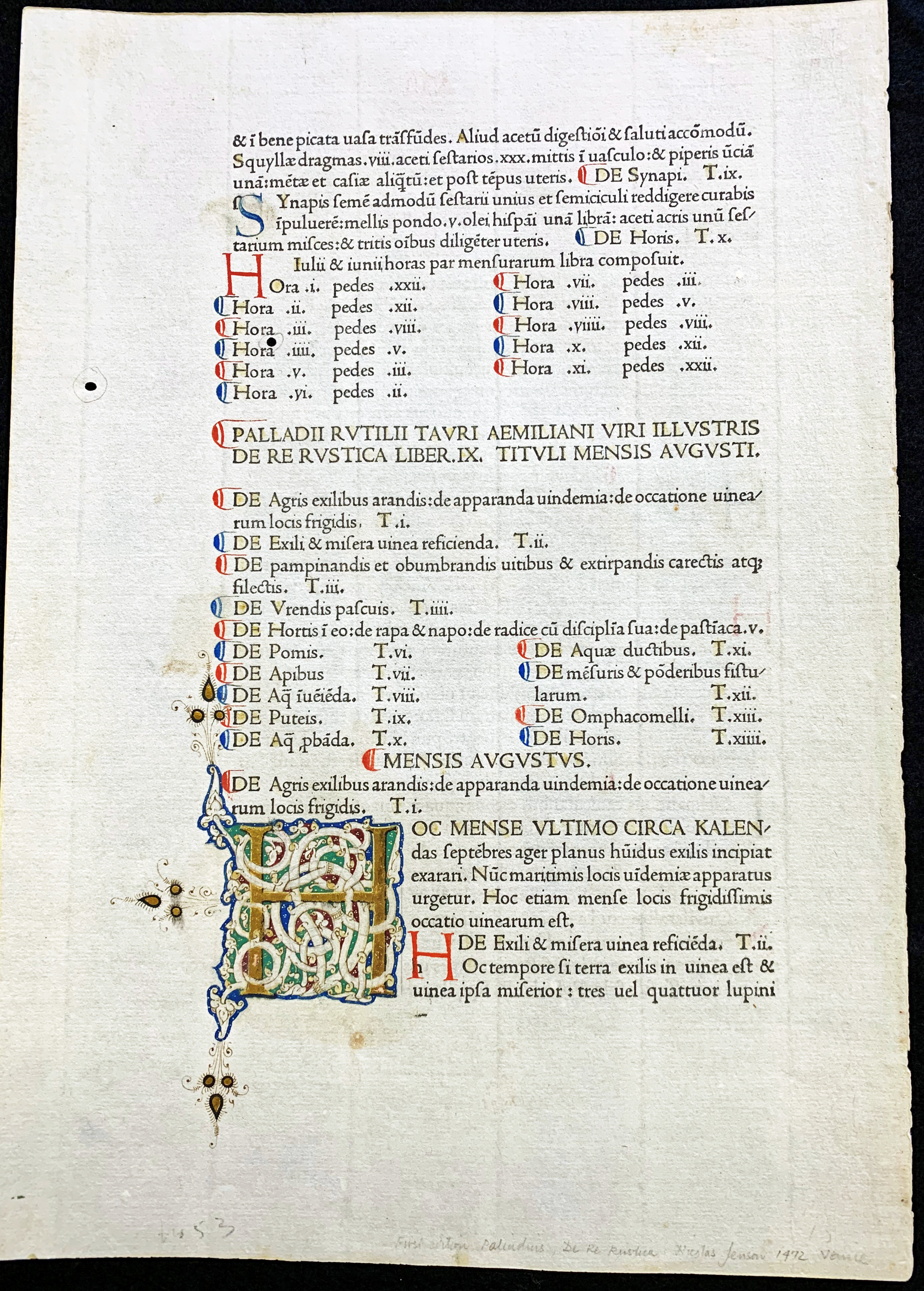 Marcus Terentius Varro (116‑27 B.C.) was born in the Sabine town of Reate, probably to a family of equestrian rank.  De re rustica, or res rusticae, focused on literature, antiquities, and natural history, including agriculture, such as the raising of cattle and other live stock, game birds, and bees.

Special Collections' leaf includes manuscript rubrication and a highly decorative initial 'H' with made of gold leaf;  pigments made of lapis, malachite and possibly cochineal highlight the foliage.