Many of the stories in Sabrina & Corina take place in Denver, and one story is specific to the Cheesman Park area. Several stories describe Southern Colorado, the ancestral home of the author. Setting and place play an important role in these chapters.

The slide show below replicates an exhibit of maps that was on display during CU Boulder's Diversity Summit in Spring 2020. Sabrina & Corina was the featured Campus One Read book at CU for the summit.

For more information about the places and settings in Sabrina & Corina, explore the tabs below.

Explore detailed building by building maps of Denver neighborhoods from the decades before Sabrina & Corina. More information about the history and use of Sanborn Fire Insurance Maps can be found at the Library of Congress website. 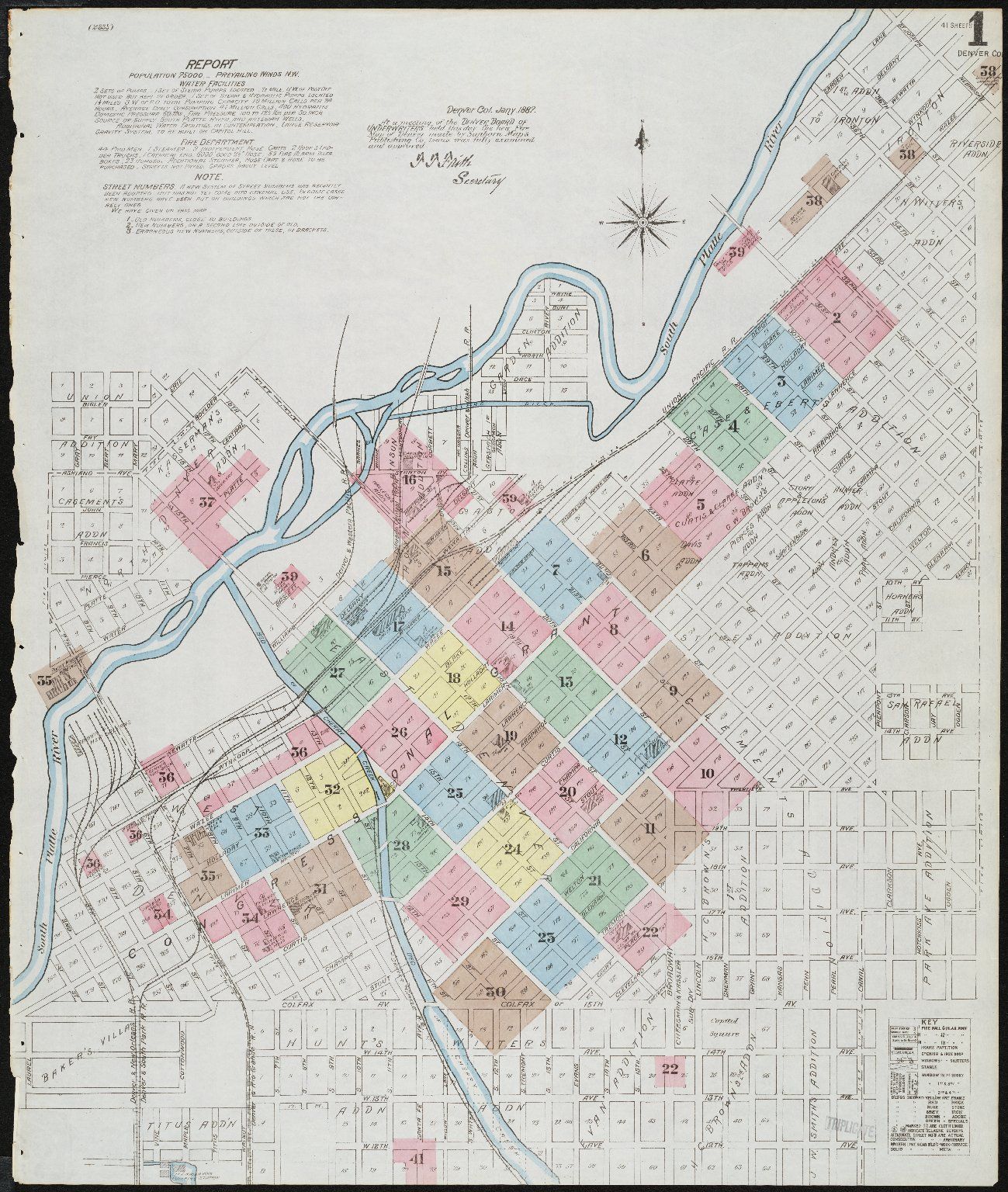 Although it remained mostly in the hands of the Utes, the San Luis Valley was officially Spanish until Mexico won independence in 1821. In an attempt to settle the area, Mexico established numerous land grants within the Spanish territory. The first permanent settlement in Colorado, known as San Luis de la Culebra, was established in 1851 on the Rio Culebra River on the Sangre de Cristo Grant. To protect the early settlers in the valley, Fort Massachusetts was established north of San Luis, in 1852.

The area became part of the United States after the Mexican-American War ended in 1848. In 1849 the Utes signed a treaty with the US government, agreeing to allow safe passage for American citizens. In 1861, the area of Alamosa County, along with most of the San Luis Valley, became part of the Colorado Territory. By 1880, the Southern Ute Indian Reservation had been established in southwestern Colorado, some eighty miles west of the San Luis Valley, and the remaining Capote Utes forced onto the reservation.

Hispanos, descendants of Spanish settlers, set up farming and ranching communities in the San Luis Valley. They brought with them a form of land settlement and irrigation, the acequia system, that was based on principles of equity, shared scarcity and cooperation. Today, the population of Alamosa County is nearly 40 percent Latino, a reflection of the San Luis Valley’s diverse cultural roots. 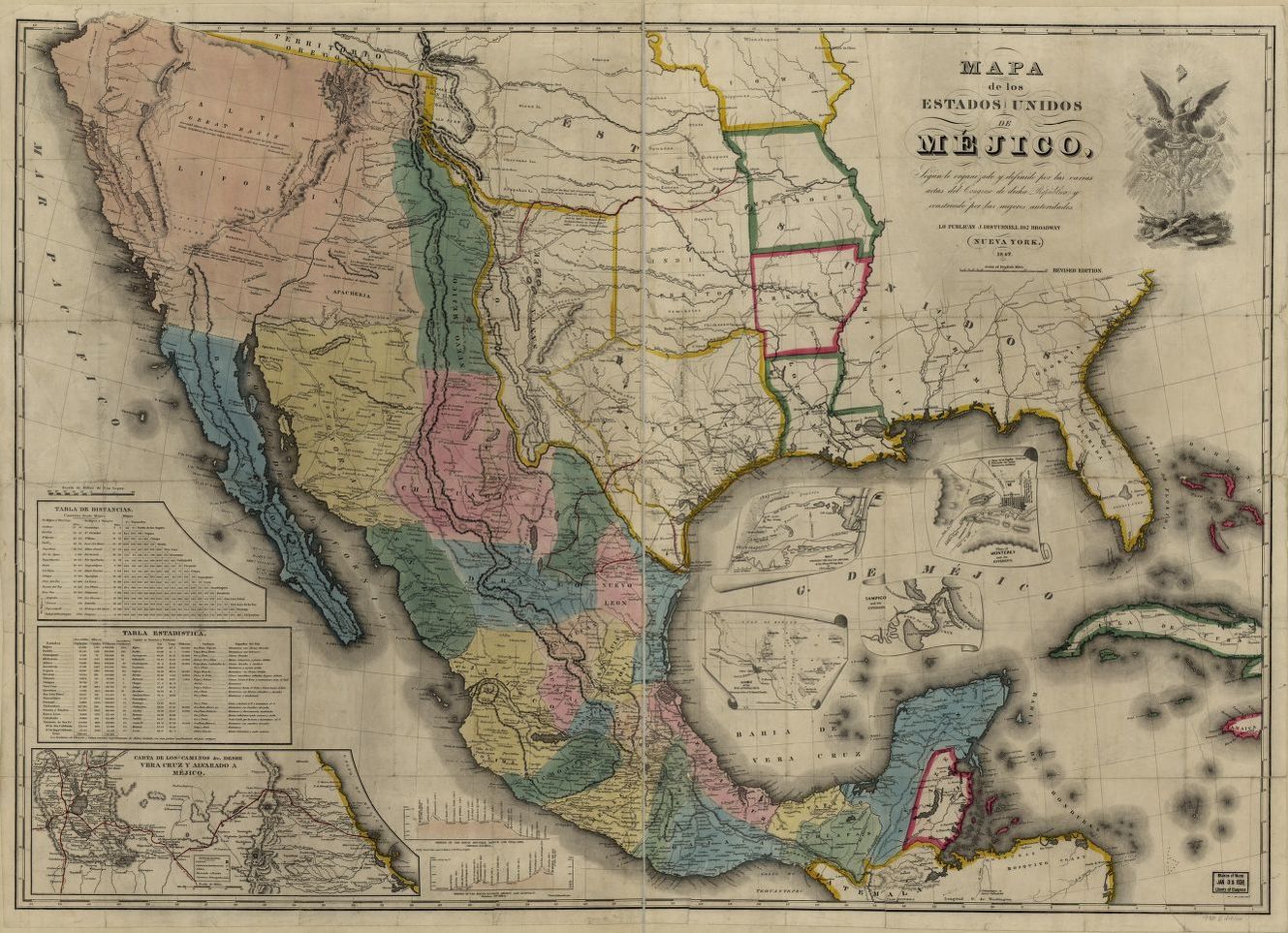 Called the Disturnell Treaty Map because it was used in negotiations over the boundary between the U.S. and Mexico following the Mexican-American War.

On February 2, 1848, a Treaty of Peace, Friendship, Limits, and Settlement was signed at Guadalupe Hidalgo, thus terminating the Mexican-American War. While the war was ostensibly about securing the boundary of the recently annexed state of Texas, it was clear from the outset that the U.S. goal was territorial expansion. Some decades earlier, the United States had secured the Louisiana Purchase, and President Polk now saw it as America's "manifest destiny" to acquire access to a western ocean through the acquisition of Nuevo México and the Californias (which included parts of the present-day states of New Mexico, Arizona, California, Nevada, Utah, and Colorado). Ultimately, Mexico was obliged to cede Alta California, Nuevo México, and northern portions of the states of Sonora, Coahuila and Tamaulipas.
-- from The National Archives 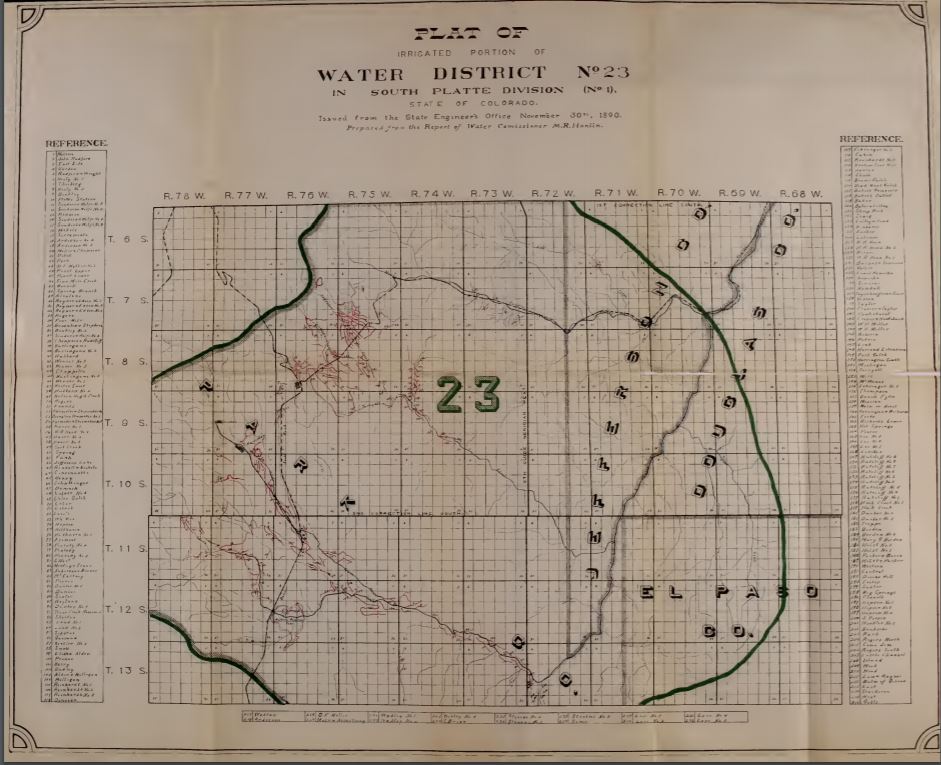 Map of the San Luis Valley Being the Irrigated Portion of Water Division No.3, 1890

Several stories in the book describe Southern Colorado, the ancestral home of the author.

Below are links to topographic maps that show Blanca Peak, the highest peak in the Sangre de Cristo mountain range as well as topographic maps of Alamosa and the surrounding San Luis Valley area, from various dates, which you can explore. 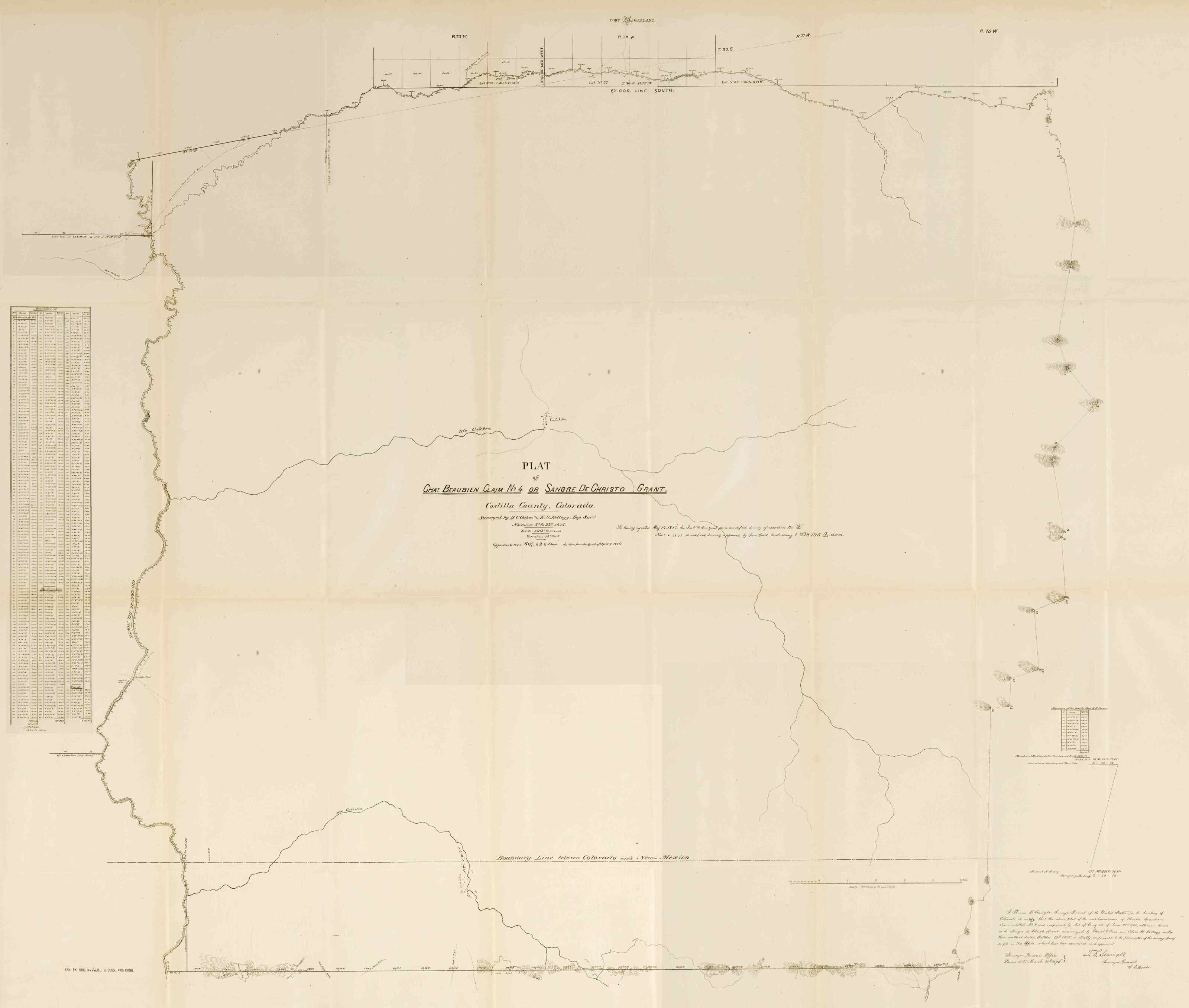 In 1843 Charles (Carlos) Beaubien and a partner were granted 1,000,000 acres of land in the San Luis Valley by Manuel Armijo, the governor of the Territory of New Mexico. Beaubien encouraged Hispano families from the Taos area to settle this land. 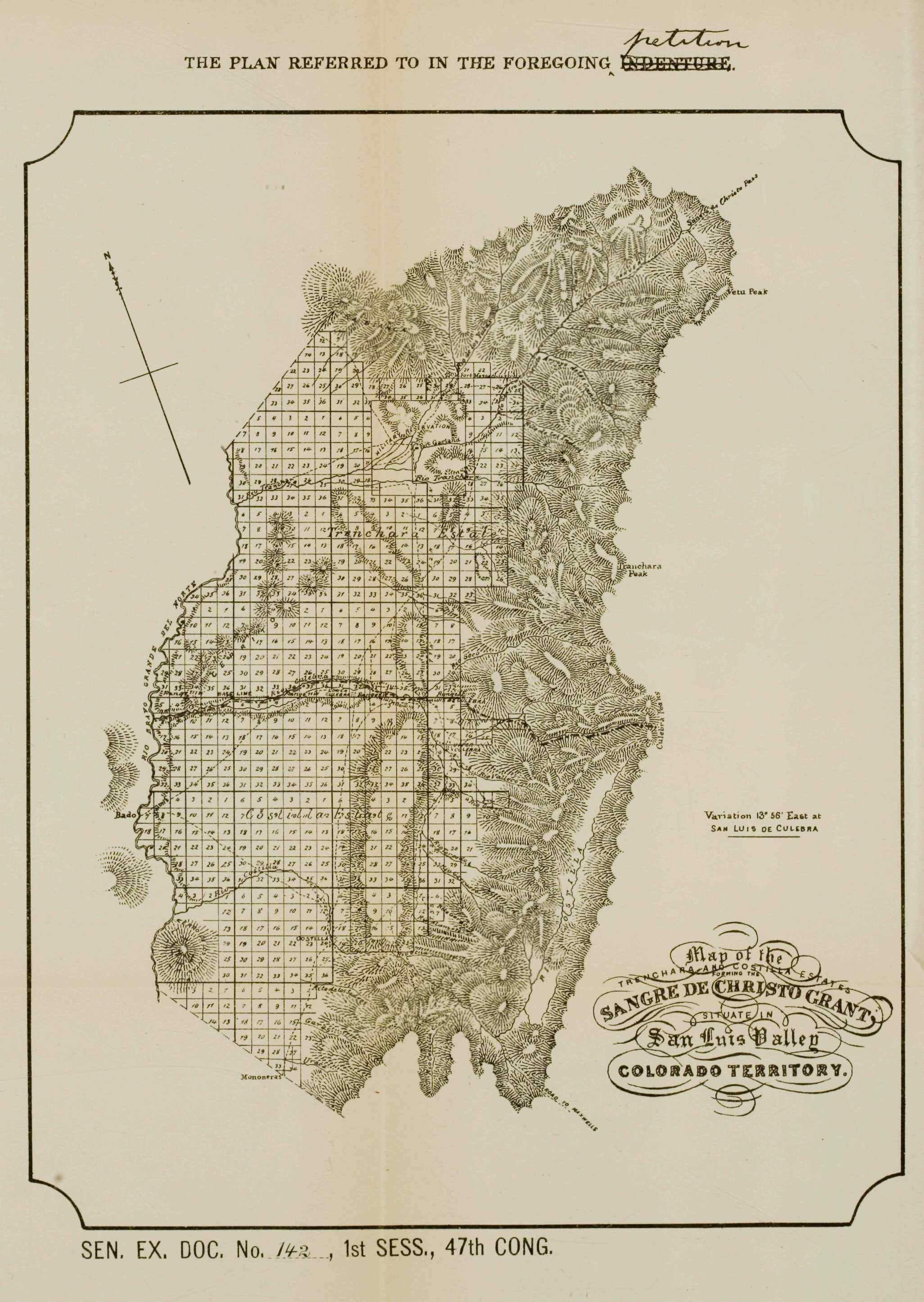 Beaubien’s half of the Sangre de Cristo grant was sold to William Gilpin, the first governor of Colorado Territory, in 1864. He intended to sell the land to European investors, dividing it into the Trenchara and Costilla Estates. The rights of original settling families to agricultural use of the land were meant to transfer with ownership.