Setting up Juris-M for Japanese

Japanese has especially complicated orthography, making Japanese Studies researchers prime candidates to best take advantage of Juris-M's multilingual functionality. This step-by-step guide will show you how to save sources with vernacular, transliterated, and translated metadata fields. For other languages the steps will basically be the same, just add the language your are working in and its corresponding romanization system.


This will allow you to tell Juris-M that a title, author, etc. is Japanese. You should have Japanese listed below, other languages may be listed too.

With the "Languages" tab still open, you can now add variations. For Japanese, you'll need to add a variant for Romanized Japanese.

What is ALA-LC Romanization? These are the officially accepted ways to Romanize languages not written with the Latin alphabet.

Your language section should now look something like the image below. You may have additional languages, and you can remove ones you will never use.

Finally, you can click on the text under "Nickname" and give the languages and variants more-user friendly names.

You can add as many languages as you like, with as many variations as you want to add. By including these, in some rare instances, Juris-M might automatically pull Japanese and English metadata for sources simultaneously. One case where this can happen is when saving citations from the CiNii database.

It is also important to realize that Juris-M cannot "check" if the imported data is correct. For example, you could write Japanese in an English field or vice versa. The purpose of these fields is so Juris-M knows how to correctly place all information in the correct order with the correct punctuation when automatically generating citations and bibliographies.


Adding Multilingual Information to your Sources

Sometimes Juris-M can pull multilingual information, but often you will have to do it manually. It is usually quicker to import the Japanese metadata, and then add the Romanization and/or translation. However, you will sometimes have to pull Romanized/English metadata first and add the Japanese.

This depends entirely on where you are pulling information from. Library catalogs will likely give you only the Romanization, while CiNii might give you the Japanese, Romanized, and English (translated) data all at once. This makes it essential for you to check over the data you pull so that it will format correctly when generating citations and bibliographies.

Here is an article pulled from CiNii. In this instance it only pulled the Japanese metadata for the source. Right-click

title to set the language of the field. Since the document is Japanese, set it to Japanese (obviously). 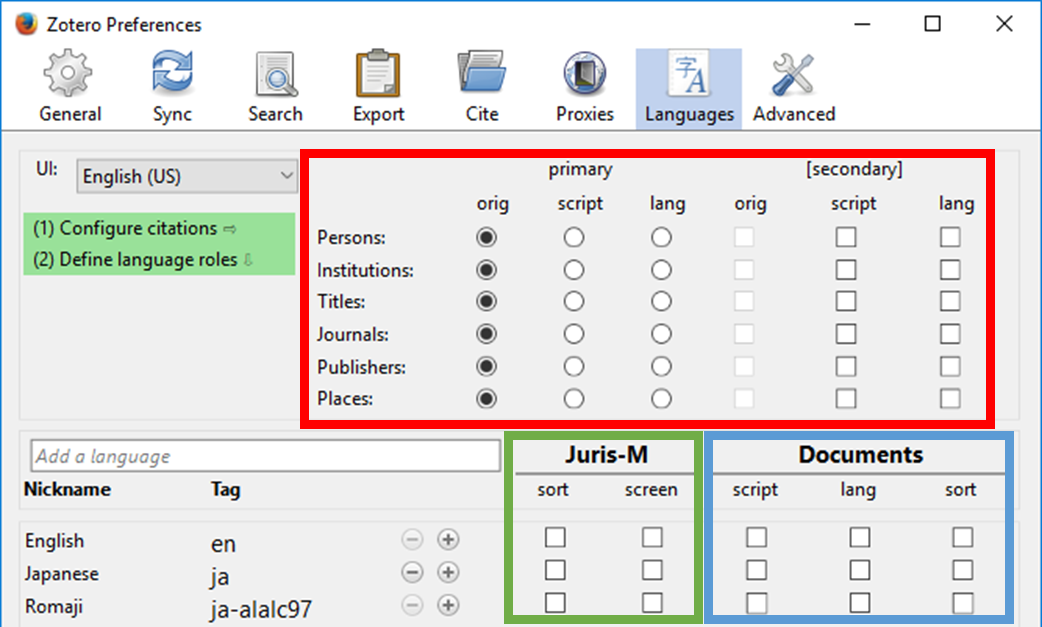 This image above is how the Juris-M language grid looks by default. It's essentially set to "do nothing." Meaning that Japanese sources will generate only in Japanese, and English sources only in English. It is made of 3 interacting parts, noted by the ■ red, ■ green, and ■ blue squares.

Experimenting with the language grid is best way to learn how it works. The two preset configurations below are "cheat sheets" for the two you'll most likely need. Match your own Juris-M language settings to the presets below. They are based on the guidelines in the Yale CJK citation guide.

Vernacular with Transliterations, no Translations 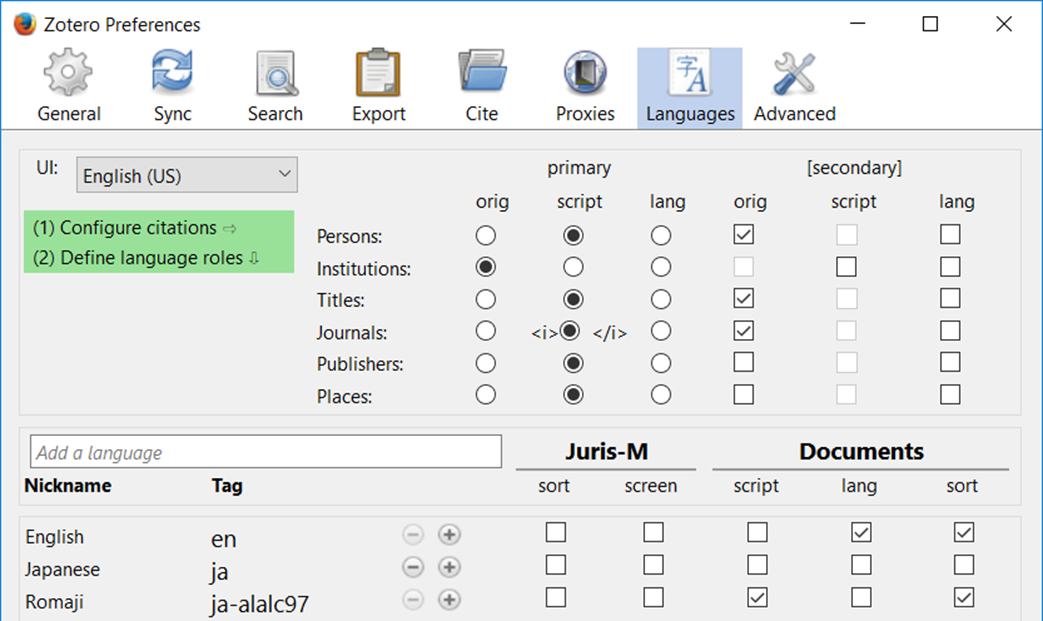 Vernacular with Transliterations AND Translations 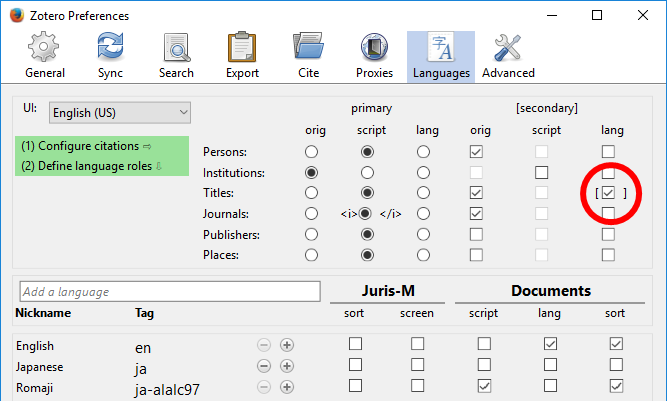